A cryptocurrency, crypto-currency, or crypto is a digital asset designed to work as a medium of exchange wherein individual coin ownership records are stored in a ledger existing in a form of a computerized database using strong cryptography to secure transaction records, to control the creation of additional coins, and to verify the transfer of coin ownership. It typically does not exist in physical form (like paper money) and is typically not issued by a central authority. Cryptocurrencies typically use decentralized control as opposed to centralized digital currency and central banking systems. When a cryptocurrency is minted or created prior to issuance or issued by a single issuer, it is generally considered centralized. When implemented with decentralized control, each cryptocurrency works through distributed ledger technology, typically a blockchain, that serves as a public financial transaction database.

Bitcoin, first released as open-source software in 2009, is the first decentralized cryptocurrency. Since the release of bitcoin, other cryptocurrencies have been created.

Here is a list of some major cryptocurrency exchanges:

API is an acronym for Application Programming Interface. In general, an API is an interface that allows two unrelated systems to interact with each other. An API specification describes the way that each of the two systems must interact with the API itself (such as the language that must be used, the syntax of messages that are passed back and forth, how frequently the messages can be sent, etc.).

Specifically for cryptocurrency trading, an API enables the client to interact with the exchange programmatically (via software instead of a human interface), allowing the client to obtain real-time market data, make trades, and manage the user's account.

A few of the tasks that can be accomplished via an API:

Representational state transfer (REST) is a software architectural style that was created to guide the design and development of the architecture for the World Wide Web. REST defines a set of constraints for how the architecture of an Internet-scale distributed hypermedia system, such as the Web, should behave. The REST architectural style emphasizes the scalability of interactions between components, uniform interfaces, independent deployment of components, and the creation of a layered architecture to facilitate caching components to reduce user-perceived latency, enforce security, and encapsulate legacy systems.

A web service that obeys the REST constraints is informally described as RESTful. Such a web service must provide its web resources in a textual representation and allow them to be read and modified with a stateless protocol and a predetermined set of operations. This approach allows the greatest interoperability between clients and servers in a long-lived Internet-scale environment which crosses organisational boundaries.

In a RESTful web service, requests made to a resource's URI elicit a response with a payload formatted in HTML, XML, JSON, or some other format. For example, the response can confirm that the resource state has been changed. The response can include hypertext links to related resources. The most common protocol for these requests and responses is HTTP. It provides operations (HTTP methods) such as GET, POST, PUT, and DELETE. By using a stateless protocol and standard operations, RESTful systems aim for fast performance, reliability, and the ability to grow by reusing components that can be managed and updated without affecting the system as a while, even while it is running.

WebSocket is distinct from HTTP. Both protocols are located at layer 7 in the OSI model and depend on TCP at layer 4. Although they are different, RFC 6455 states that WebSocket

is designed to work over HTTP ports 443 and 80 as well as to support HTTP proxies and intermediaries,

thus making it compatible with HTTP. To achieve compatibility, the WebSocket handshake uses the HTTP Upgrade header to change from the HTTP protocol to the WebSocket protocol.

Schematically the WebSocket connection can be represented as follows: 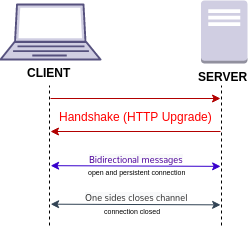 Priya Pademkar lists some differences between the REST and WebSocket APIs:

The following diagram by Emmanuel Picard emphasizes the differences between REST and event-driven APIs (such as those based on WebSocket): Few of the cryptocurrency exchanges use FIX and other specialized financial protocols. For completeness we mention them here.

The Financial Information eXchange (FIX) protocol is an electronic communications protocol initiated in 1992 for international real-time exchange of information related to securities transactions and markets. With trillions of dollars traded annually on the NASDAQ alone, financial service entities are employing direct market access (DMA) to increase their speed to financial markets. Managing the delivery of trading applications and keeping latency low increasingly requires an understanding of the FIX protocol.

The following diagram by Gareth Randall shows how FIX messaging looks between Buyside/Customer and Sellside/Supplier: Other finance-specific protocols include FIX Adapted for STreaming (FAST), ITCH, and OUCH. See this page for more details.

Kdb+tick is an architecture which allows the capture, processing, and querying of real-time and historical data. It can be used to capture, store, and analyze massive volumes of data in real-time.

It is shipped in the form of a q library and consists of three q files:

To install kdb+tick, place these files under the QHOME directory (e.g. C:/q), so you end up with:

The architecture of a kdb+/q system is as follows. (The diagram is reproduced from Building real-time tick subscribers by Nathan Perrem, Kx:

The components are as follows:

The sequence of events

The sequence of events is as follows:

Two particularly important functions are defined on the tickerplant:

The following important variables are defined on a tickerplant:

Create the file C:/q/tick/example.q (replacing C:/q with QHOME on your machine) with the following contents:

This file defines the schemas for the quote and trade tables.

To launch the tickerplant, go to the location of the q executable (on Windows, q.exe and launch it with the following command line:

On Linux and MacOS, you may need to run the above as

Once the tickerplant is up and running, you should see the log file C:\q\w64\example2021.06.19 appear (the date in the file name will, of course, be the current date).

The tickerplant will not start unless the file with the table schemas, C:\q\tick\example.q, is in place. If it is missing, you may see the following error message:

To launch the rdb, go to the location of the q executable (on Windows, q.exe), and launch it with the following command line:

If you launched the tickerplant on a different port, say on 5008, you need to specify it as the command line parameter to tick/r.q as follows:

The full syntax for specifying the location of the tickerplant and the hdb, respectively, is

The hdb is optional. It may or may not be running.

We will assume that the tickerplant is running on localhost:5010.

Inspecting the tickerplant and the rdb

If we now open http://localhost:5011/ in the browser, we will see that the rdb has been initialized with the schemas from C:/q/tick/sym.q, but the two tables are empty: We see the same empty tables if we examine the tickerplant on http://localhost:5010/.

If we now inspect the rdb, http://localhost:5011/, from the browser, we'll see that the tables are no longer empty:

On the tickerplant http://localhost:5010/, the two tables remain empty. This is because the tickerplant does not keep the data in its tables. It writes the data to the log file, C:/q/264/example2021.06.19, and publishes it onto the rdb. If the rdb is restarted (try it), the log file will be replayed, and the data will reappear in the rdb's tables. The log file preserves the integrity of the data, should the rdb crash.

Normally, you would not be .u.upding the data manually onto the tickerplant. This is a job for the feedhandler. We can .u.upd the data from Python using the exxeleron qPython library. It can be installed using

Let us write the following toy feedhandler, which doesn't, however, listen to any feeds:

Let's run it. We'll see new rows of data appear in the rdb (via the tickerplant, where these rows don't stay).

To launch the historical database (hdb), use the following command:

The hdb will look for the example directory (created by the rdb), in which it expects to find the on-disc tables.

Note that the first data will appear in the hdb after midnight: today's data is kept in memory on the rdb, whereas yesterday's and earlier data is in the hdb.

The publish-subscribe is a messaging pattern wherein the senders of messages, called publishers, do not program the messages to be sent directly to specific receivers. Instead, the publishers categorize messages into classes (or topics) without knowledge of which receivers — called subscribers in this context, — if any, there may be, and publish these messages through an appropriate mechanism.

Subscribers express interest in (subscribe to) one or more topics, and only receive messages that are of interest, without knowledge of which publishers, if any, there are.

A close relative to a message queue, a message topic provides a lightweight mechanism to broadcast asynchronous event notifications, and endpoints that allow software components to connect to the topic in order to send and receive those messages.

Unlike message queues, which batch messages until they are retrieved, message topics transfer messages with no or very little queueing, and push them out immediately to all subscribers.

All components that subscribe to the topic will receive every message that is broadcast, unless a message filtering policy is set by the subscriber. Kdb+/q supports the publish-subscribe pattern via kdb+tick. Kdb+/q is not alone in this. Technologies, such as

were designed primarily for message queueing use cases, whereas

Some of these technologies, notably Apache Kafka, can be adapted to work with kdb+/q (check https://github.com/KxSystems).

This should ensure that the output doesn't get truncated and is readable in the console.

Open a socket connection to the tickerplant:

This function will be called when updates arrive. Here we are simply outputting to the console the name of the table (x) on which the update has arrived and the update itself (y).

Now subscribe to updates on all syms (`) to table `trade:

We should then see the updates displayed by the function upd as we have defined it. Thus

on the tickerpant should result in

on our subscribing instance.

Subscribing to tickerplant updates from Python

Let us see how we can subscribe to tickerplant updates from Python using the exxeleron qPython library.

We will now write a real (rather than toy) feedhandler in Python for the BitMEX exchange using the WebSocket protocol.

First, we need to

We start with the following skeleton for our feedhandler:

We use our skeleton feedhandler to sample some trade messages:

and some order book update messages:

Looking at these messages it is easy to come up with table schemas, which we save in C:\q\tick\bitmex.q:

We then launch the tickerplant as

the rdb (in another terminal) as

and the hdb (in another terminal) as

We complete the implementation of our feedhandler as follows:

We are now ready to launch the feedhandler:

Watch the tables on the rdb populate: Finally, we prototype a (very basic) visualization tool for our data on the basis of the Python tickerplant subscriber that we have introduced above. Here is the code, which can be improved in many ways:

And here is the result of running it for a few minutes: